HAPPY NEW YEAR everyone! May 2012 bring you happiness and health with good friends, yummy food and excellent wine! A new year, a new blog post. I feel bad to have neglected this little passion of mine, I could blame it on a number of things – work, traveling, the holiday season, and that crazily addictive series of Game of Thrones books that I just cannot put down! I’m literally hiding my current book under the bed to write this. Many thanks to WS for the thumbs up on Saturday night, and encouraging me to get back on the wagon! All the while, I have been taking countless photos of food, and have lots of posts on the back-burner. But for now, I’ll start with my latest adventure – Paris.
Aaaaaaaah Paris! There are many, many, advantages of dating a Frenchman, but one on the top of my list has got to be having an excuse to visit his homeland. The food, the wine, the art, enjoying all the simple pleasures in life – such is the splendor of France. Never will you ever catch me complaining about taking a 12 hour flight to spend time with his family.

My 3 short days there were nothing short of culinary delightfulness that warmed the heart. I’m not dropping names like Robuchon, Ducasse, Gagnaire etc. I’m talking about good ol’ homestyle cooking by Maman B, served with a soup spoon of family recipes, a cup of savoir faire, a huge dollop of love, and a pinch of butter. I have never been to a starred restaurant in Paris, despite their prolific existence, and yet I really don’t have the desire or need to. After not seeing her son for half a year, his mother really pulls out all the stops – marinading meats and planning meals far in advance of our arrival. 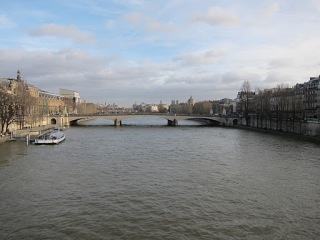 Every day is started with Mariage Freres tea and cakes or pastries, something that has become a morning ritual. And not just any pastries … Eric Kayser pastries! Just a hop skip and a jump away from home, Kayser is one of the best boulangeries in town, and every day they buy at least a couple of baguettes there for their daily bread.

Lunch is usually something very light, and dinner is la pièce de résistance. People talk about the “French Paradox” – the fact that French people suffer a relatively low incidence of coronary heart disease relative to other nations, despite their high intake of saturated fats (butter and cream and duck fat, oh my!). There is even a cookbook called “French Women Don’t Get Fat” ! Really the trick is not to over-indulge, to savour a rich meal once in a while, whilst tempering these with relatively low-fat meals. Having said this, it is not a skill that I have managed to acquire – as a tourist who has only the opportunity to eat these wonderful pastries, macaroons and chocolate creations on every street corner once or twice a year, it ain’t easy when there is so much temptation around! As my father used to say, I have a lot of will power, but no won’t power!

The theme of this winters’ meals was gibier, or game meats. Dinner on the first day involved two countries, 3 days of marination, and 5 hours of cooking. PB’s parents like to go to Ardennes, Belgium every year and for this meal Madam B prepared a dish of marcassin, or baby wild boar, which she brought back from Ardennes to Paris in early November and saved it for this meal. Monsieur B very proudly mentioned that two bottles of fine wine went into the cooking of this dish. With a sauce not dissimilar to boeuf bourguignon, served with celeriac mash, and accompanied with a bottle of 2001 Pomerol, the photo really does not do it justice. For dessert, pears stewed with sweet wine, cloves and black peppercorns. 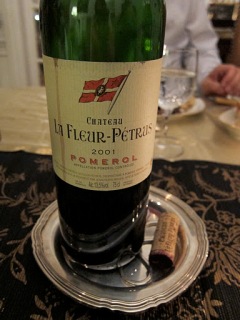 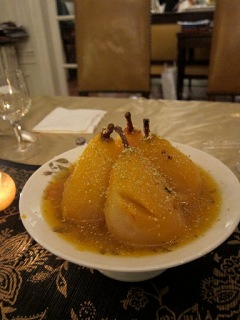 The next day, just as we were about to go out for a spot of shopping, we went into the kitchen to find Madam B preparing the ingredients for her FABULOUS almond and apricot cake. Now, I have been politely asking her for the recipe for the last 6 months. This trip, she not only promised to give me the recipe, but also to do a cooking demonstration for me!! Bye bye Le Bon Marché, hello baking lesson! I hate to gloat – you can look at the pictures, but the recipe is not included. This one is staying in the family, and I have been sworn to secrecy.

After that, there was no point in going out. We asked Madame B if it’s alright if we stayed in for lunch. She beamed at us, clearly happy to feed her son an extra meal. Then, almost as if she keeps these ingredients in the fridge juuuust in case, she pulls out some veal (it’s the Mary Poppins bag of refridgerators) and starts gracefully dancing around the kitchen. I sat, read a book, murdered the French language whilst trying to speak to his father, and waited.


And then finally, some shopping! I don’t usually take photos of designer stores à la Chinese tourist (it helped that I wasn’t the only one doing it!), but the Hermes ’boutique’ in St. Germain de Pres is less boutique, more modern art installation. 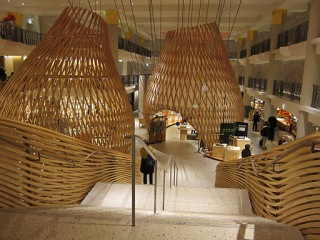 That evening, we were invited for a meal at one of PB’s college friends’ homes. They live in a beautiful area of Paris,  Rue de Faubourg Saint Honoré; we strolled through the streets ooh-ing and aah-ing (well, I was doing most of the ooh-ing and aah-ing) at the twinkling lights and the magical window displays. Even the rain seemed to fall gracefully, and I didn’t mind walking around with my hands shoved into my pockets and my hood raised over my head. 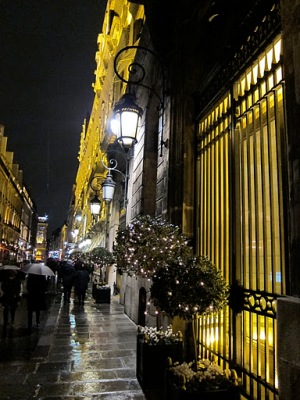 This dinner party was on another level! I’m not sure if it was just because it was Christmas, or the fact that the hostess seemed to pay attention to detail in general, but the dinner table looked like it was straight out of a magazine spread.  Red roses adorning the head of the table, candles anchored in sand and displayed in tall goblets, acorns (which she incidentally picked off the forest floor herself, as you do!) placed systematically at each setting. Seriously, it makes me want to go out and buy a table cloth! In fact, I will do just that this week!

The hosts were so gracious, it was nice to finally meet some of PB’s oldest friends. And the food – simple, refined, amazing. It really goes to show that ingredients are really the be-all and end-all of any good meal.For the main course they served venison and mash potatoes with truffles. But this was no ordinary venison, oh no. I can’t remember if the venison was raised by A’s mother or one of her neighbours, but it was freshly slaughtered and brought to Paris to be served at the table. S explained that the meat was so tender because the animal had not been chased or hunted, and therefore it was not petrified before it died (!!!) It’s strange to hear about the food that you are eating in this manner, when you are used to buying it from a supermarket counter! And also especially because they couldn’t think of the English word for venison, and so called it “bambi”. However, it was a refreshing way to eat – to know exactly where the food on your plate is coming from, how fresh it was, that it was naturally and humanely raised. It was a happy venison! Not to mentioned perfectly cooked to a medium-rare and served with a jus that oozed flavour.

It was A’s birthday that day, and we were all treated to an opéra cake from Dalloyau to celebrated the occasion. 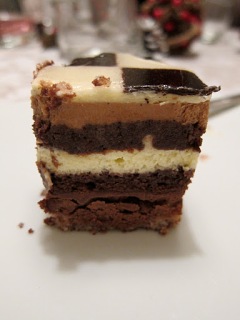 On the third day, we went out for my first fondue! With PB’s friends, we strolled up Rue Mouffetard, a student hangout with cheap drinks and as it turns out, it was the most economical meal we had in Paris. Although I would still like to try a more refined fondue in the future, it was a deal at 15 euros a pop!

After Paris, it was a hop, skip, and a jump to Madrid to spend New Years Eve with V&A. It was the first time for both of us flying out of Orly Airport, and my, what an airport! If arriving at Hong Kong airport is a tourists dream, then departing from Orly is like a snackers dream to the nth degree. I’d only advise that you go to the airport hungry! The departure/arrivals hall is chocabloc full of everything that a diet would avoid … I for one was walking around like a wide-eyed child in a candy store.

After an amazing 2 days in Madrid (to be visited in another post), we were back to Paris for a last supper before returning to Hong Kong. These last few hours in Paris were quite depressing for me – it’s as if I was suffering from pre-departure withdrawal. Goodbyeparisitis: symptoms include moodiness, a drop in energy levels, and overall sadness.    Madame B outdid herself again, this time preparing a Petit Salé –  traditional dish of salt cured pork simmered in water with vegetables. The pork was tender and moist, and there was not a morsel left on the plate.

Dinners at PB’s family home always follow a schedule which I find very comforting. Aperitifs with little amuse bouches, the main course, cheese, dessert, then coffee. A conversation about the wine we partake in always invariably occurs at some point during the meal.

The first time I visited, I made the huge mistake of not preparing my answer for the question that was undoubtedly going to be asked. It happened during the first meal, and his father queried:

“So, what is your favorite wine?”

I’m not kidding, that was my answer. I nearly died. His father looked at me incredulously, one eyebrow raised and says:

It turns out it was the best answer I could have given. At every meal, his father was determined to help me discover what my favorite wine was. Every meal was accompanied by a truly amazing bottle of wine, of excellent vintage, from different regions in France. At the end of it all, during our last dinner of the trip, he asks the same question. I answer, “definitely the first one that you served!”, very confidently. He looks at me with a nod of approval and says, “The Chateau Margaux! Well, I must say you have excellent taste.”

Enough said, I totally slam dunked that one!