But calm and lucid as an English lake,
Beloved by beams and wooed by wind and wing,
Shut in from tempest-trampled wastes of wave,
And sheltered from white wraths of surge by walls—
Grand ramparts founded by the hand of God,
The lordly Harbour gleams. Yea, like a shield
Of marvellous gold dropped in his fiery flight
By some lost angel in the elder days,
When Satan faced and fought Omnipotence,
It shines amongst fair, flowering hills, and flows
By dells of glimmering greenness manifold.
And all day long, when soft-eyed Spring comes round
With gracious gifts of bird and leaf and grass—
And through the noon, when sumptuous Summer sleeps
By yellowing runnels under beetling cliffs,
This royal water blossoms far and wide
With ships from all the corners of the world.

From the poem, Sydney Harbour, by Henry Kendall. 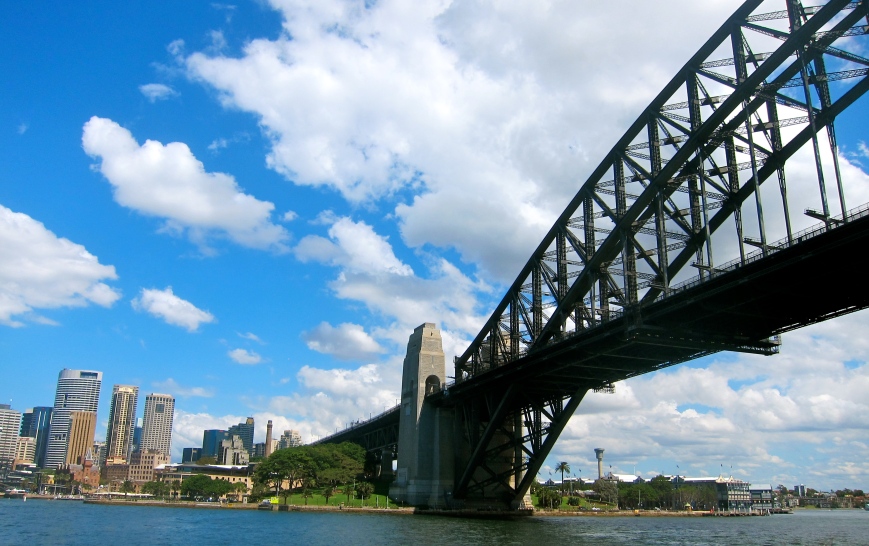 There is little wonder why Sydney Harbour is known as the most beautiful natural harbour in the world. As a Hong Konger, I’d like to proclaim the same about my harbour, but apples to apples, it doesn’t make the cut. Perhaps I am lucky to always visit in the autumn, when the sun shines brightly and the breezes are cool, but I have fallen in love with this city, so much so that I am reading poems about it!

On the final day of our visit, we boarded a ferry named Alexander (like my brother!)  for lunch at Ripples Milsons Point Luna Park, which is the first stop on the Darling Harbour service and a short 7 minute chug across the harbour.  We had been recommended to go there by a friend, who mentioned that there is a smarter restaurant above called Aqua, but that Ripples on the ground level was casual, well-priced and yet served great food. 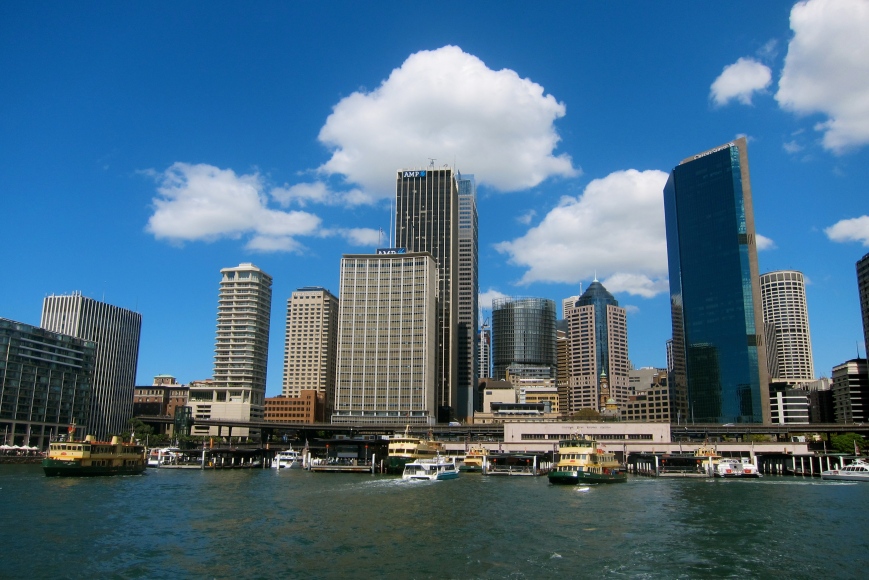 Circular Quay and a blue, blue sky as we leave the terminal

This is what we saw as we approached on the ferry – a huge smiling face with great big teeth between two Empire State Building-esk towers and a colourful ferris wheel! In this computer-reliant age, I am guilty of being one of those people that googles everything before I visit it. The experience is akin to film versus digital photography – sure, it’s nice to be able to check your screen to see if your photo turned out well.  But don’t you sometimes miss that excitement and anticipation of picking up the little envelope of photos after developing your roll of film, wondering how they look and even surprising yourself with photos that you didn’t recall taking?  Well, this time, I didn’t google anything before our lunch, so you can imagine the surprise and glee when I realised that Luna Park wasn’t of the garden variety, but a huge colourful theme park – I felt like a little girl again, for a few moments! My mother mentioned that she used to love coming here when she was younger, and the look of nostalgia that crossed over her face was heart-warming. 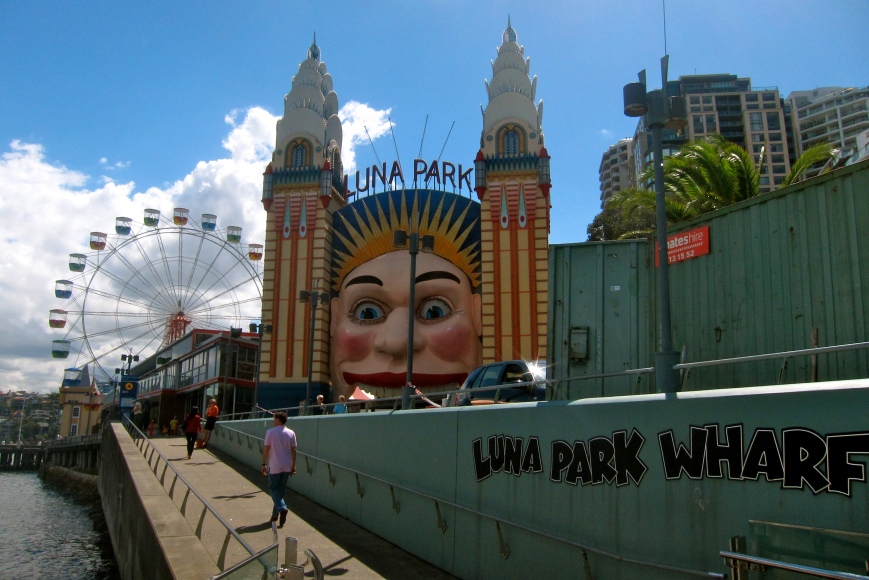 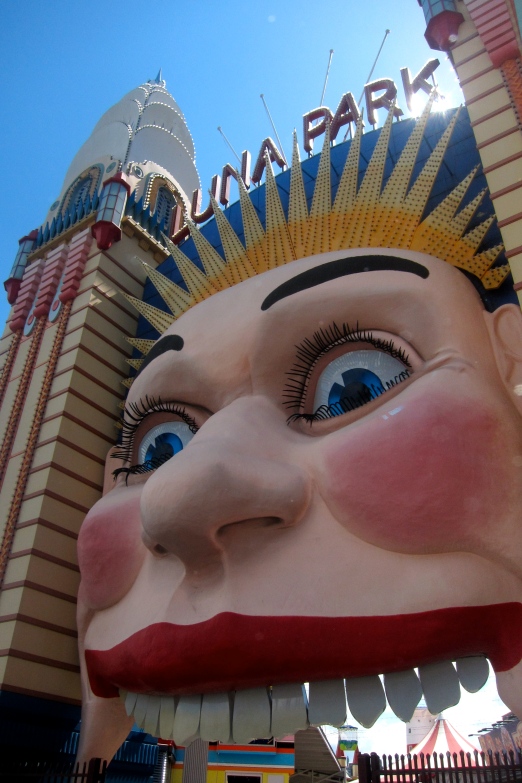 The entrance to Luna Park

From sydneywebcam.blogspot.com – a wonderful blog site that used to publish a photo of Sydney every day, but for some reason stopped in 2006. I’m tempted to write to him and ask him to continue where he left off!

The restaurant is situated next to the North Sydney Olympic Pool, most likely the most scenic public pool in Sydney, perhaps the world! Ripples is located on the bottom left-hand corner of the pool, and used to be where the pool kiosk was located.It was transformed in to an alfresco restaurant in 2002,which serves casual Australian fare with seasonal ingredients, with a view to die for.

We ordered a bottle of Rosé and a selection of food to share between the three of us. Apart from pavlova, I can’t think of a particular dish that represents Australian cuisine, like France has coq au vin, Italy has pasta, or the Philippines has adobo. When I think of Australian cuisine, I think of BBQs, seafood, and I think of the most fresh ingredients that I have tasted, ingredients that taste of sunshine. So for me, that is what Australia has – sunshine, on a plate.

The scallops were served on a block of Himalayan pink salt – stunning! I need to get me some of those! The scallops were bouncy and full of delicate flavour. I have always loved this combination of scallops, mint and pancetta and this dish does not disappoint. In fact, we liked it so much that we immediately ordered another one!

I was a bit reluctant to order sashimi, particularly because we eat so much of it at home, but my mum insisted, and I’m glad that she did. First of all, the fish was served almost at room temperature, which was actually quite nice and different from your usual sashimi experience. The kingfish had a nice fresh flavour, and I loved that avo (avocado for us non-Australians) and ginger flavour. I’m definitely trying to replicate this at my next dinner party!

Fish of the day?

We had a thing with risotto balls during this trip, and these ones were certainly very different to the ones that we tried at Berta (post coming soon). I’m not usually a fan of risotto, or risotto balls by extension, but the rice was tender and the center of melted mozzarella was a really nice surprise –  I like dem Aussie risotto balls! 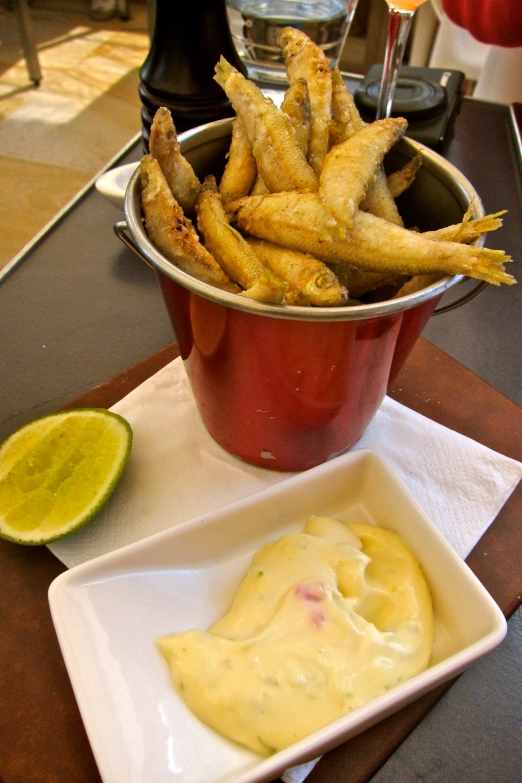 From the ‘nibbles & sharing” section of the menu, the whitebait was crispy and quite meaty as far as the small fish goes, with a nice and very dip-able dip – with all that mayo, it probably wasn’t a good idea to dip at the frequency that we were dipping …

The fish and chips was definitely the star of the show, a super thin but crispy batter surrounded the most succulent, fleshy piece of fish, served with a chunky homemade tartar sauce and fries presented in a  mini frying basket – super cute! Really, it was probably one of the healthiest fish and chips dishes I’ve had, it was not in the slightest bit oily, and the quality of the fish really stood out. Check it out: 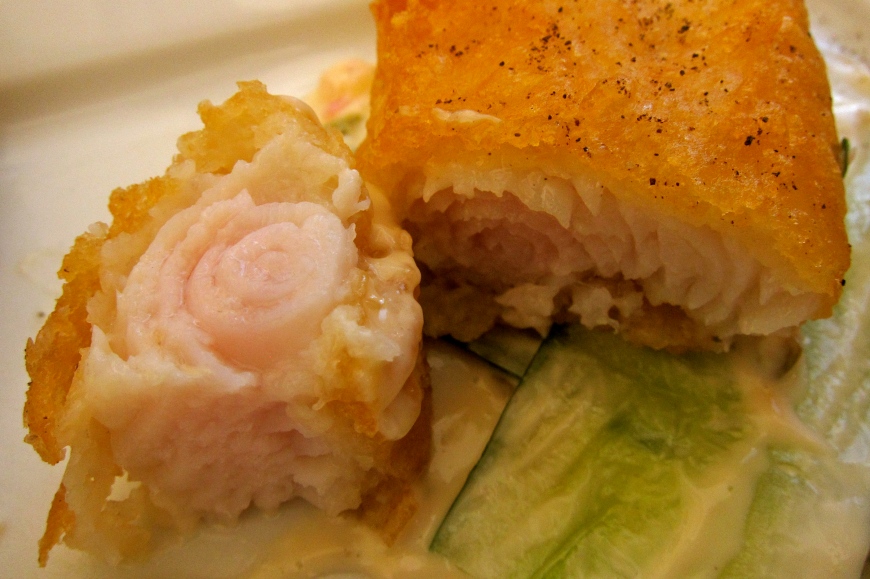 After inquiring, we were told it was a “Mirra Dory” (imagine Aussie accent), which I later found out was actually a “Mirror Dory” – a pacific dory that looks quite funny, but tastes incredible:

Illustration of a Mirror Dory – from Wikipedia

We just had to end on a sweet note, and assumed that the desserts would be just as satisfactory as the rest of the meal. Unfortunately we were disappointed by the crème brûlée – it was far too eggy and thick, and we were deceived by the menu to think that it was pistachio-flavoured, when it actually just had pistachios on the side. The garnish made the cut, but not the crème brûlée, and we only ate the sugary coating. 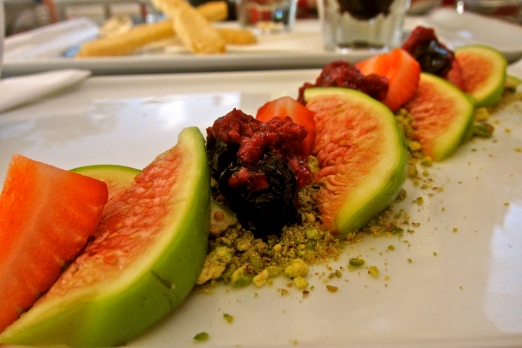 The Affogato was much more interesting – in Italian ‘affogato’ literally means ‘drowned’. It is a scoop of vanilla ice cream served with a shot of hot espresso, which you pour over the ice cream and eat with a spoon. In this case, they also gave us biscotto, but they were hard,plain, and something that looked like it could be bought in a convenience store. The ice cream was lovely though, and we opted for it to be served with Frangelico, a wonderfully rich hazelnut liqueur produced in the Piedmont region of Italy. I’d never heard of it before, but I can just imagine all the desserts that could benefit from a touch of this nutty liqueur!

For three of us, the bill came to AUD 227.50, or HK$1830. The wine was relatively reasonable at around HK$360 for the bottle. Ripples is also a BYO restaurant, and for a corkage fee of AUD $8 a bottle (HK$65), you can bring your own bottle. As we were paying for the bill, a party of 6 walked in with (I kid you not) about 7 bottles of champagne, red and white wine  – now that is what I call a boozy lunch! There are 3 other similarly styled Ripples restaurants around Sydney, all at really prime locations that I’d be interested in checking out at some point.

This café-style restaurant was pretty reasonable considering the quality of the food, the harbour-side ambiance and the incredible view of the Sydney Harbour Bridge. I’ve not had the opportunity to try too many Sydney restaurants, but I’ve found that the ambiance is always quite casual, even if the restaurant is higher end.  We were thankful to have been recommended this restaurant that serves great food at good prices, as Sydney is a pretty expensive place to eat out in general. On a final note, tips or 10% service charge are never included on the bill, so this way you can tip as you see fit!

A sneak peak at the menu: 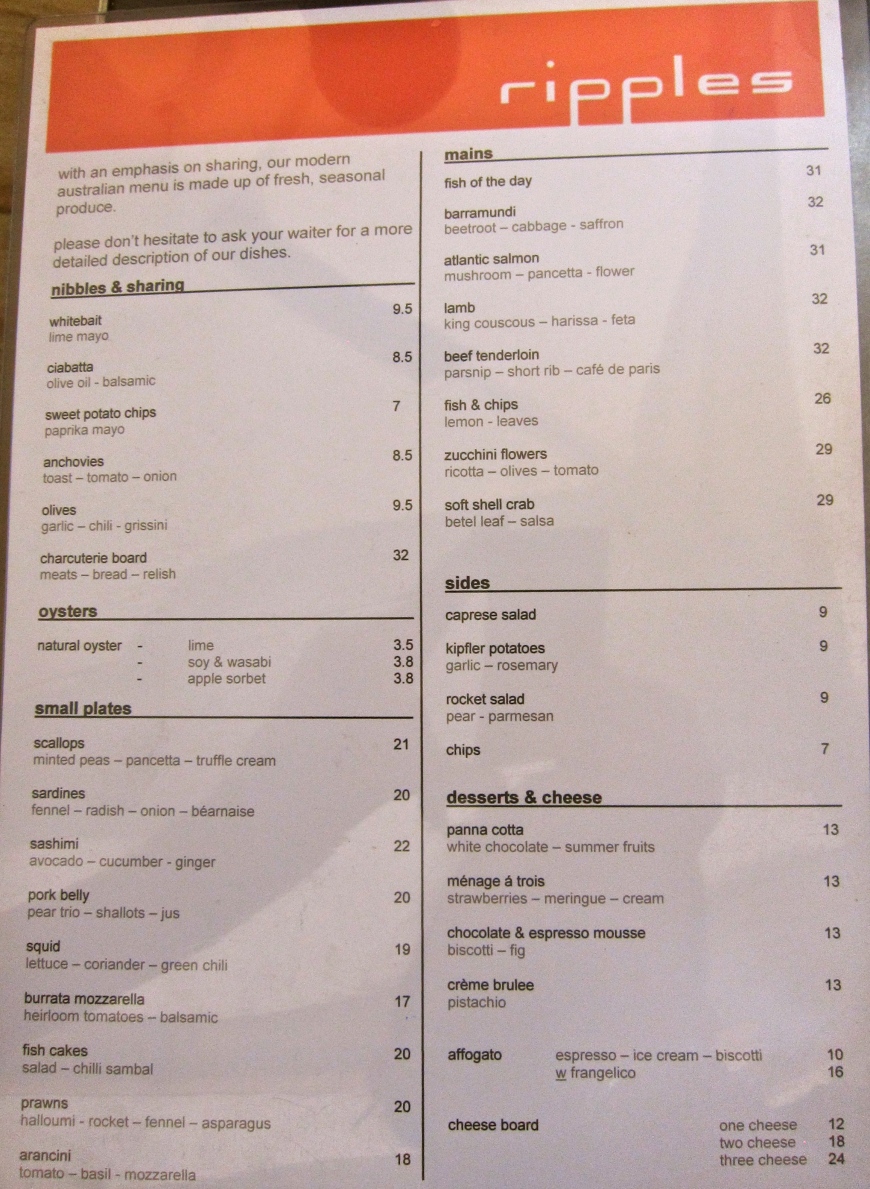 2 thoughts on “Ripples on Sydney Harbour”

Indian-inspired Food for the Global Palate