n.
1. Pursuit of or devotion to pleasure, especially to the pleasures of the senses.
2. Philosophy The ethical doctrine holding that only what is pleasant or has pleasant consequences is intrinsically good.

3. Psychology The doctrine holding that behavior is motivated by the desire for pleasure and the avoidance of pain.

Hedonism – isn’t that just the perfect word to dictate what one should do when in Paris? Pursue pleasure, feel pleased when you do it because ultimately, it’s good for you. Well,  perhaps that last statement could be questionable. However, the French Paradox observes that consuming foods with higher levels of saturated fats is not necessarily bad for you, and surprisingly enough, after two weeks in France, I did not gain an ounce of weight.

One of my most favorite travel programs about Paris at the moment is Anthony Bourdain’s The Layover – Paris. The backbone theme of this episode is that one shouldn’t go to Paris and plan too much. Visiting all the sights, spending days in museums and galleries, and hours lining up in queues to get into them. The best way to visit this city is to walk around, step into a café here, a bistrot there, buy an ice cream cone, sit in a park, or be a flâneur, and stroll around idly. He proclaims: “If you do nothing in Paris, you can still have a pretty sweet time.”

Two French men then appear on the screen to tell you the following – my favorite statement of the episode: “The real tourist is someone that would arrive totally naked. The good tourist is someone completely open-minded. You have to come naked to Paris and let us dress you. Not completely naked though, you can cover yourself a little bit! If you arrive fully clothed with your scarf, your beanie, your beret, it’s pointless. Stay at home!”

This is pretty much what we did when during our 5 days in Paris, we made no reservations more than a day in advance (even though we did try to get tables at Chateaubriand and Le Jules Verne). It does have to be said though, that it’s always best to get tips from friends about the tried-and-tested places that they’ve been to. It is often the case when we stepped into random restaurants or cafés, that the food wasn’t great, it was a bit of a tourist trap, and prices are a bit high for what you’re paying for. My favorite way to visit Paris is to book the recommended restaurants, and build our activities around the food and wine. Here are some of my Paris food highlights – on this particular trip, we booked places according to the areas where we wanted to go shopping!

When we arrived in Paris, it was sales time! Sales shopping in Paris is the best and most enjoyable experience for me. I find that they still have the popular designs and sizes in stock, everything is still fairly neat and organised, and the discounts are favorable (with most at an average of 40-50% off, even at the start of sales period). What’s more is that the sales assistants are truly helpful, friendly and efficient, and everyone speak English. If you are looking for the big brand names, then Rue du Faubourg Saint-Honoré is a good place to start, and they also have a selection of more affordable brands (Maje, The Kooples, Anne Fontaine). Whilst there we stopped off for lunch at Bread & Roses, a modern bakery/restaurant that serves bread, cake, pastries quiches etc., as well as having an a la carte menu. The prices aren’t the best (they aren’t terribly high either), but we were happy with the experience, the food, and the service.

We sat one one of the tables outside and had a good time watching beautiful people in beautiful clothing walk past. I also introduced my brothers to the coffee culture – they remarked at how coffee just doesn’t taste that good in Hong Kong, and from this point on, I could hear them regularly saying “I could do with an espresso right now.”. 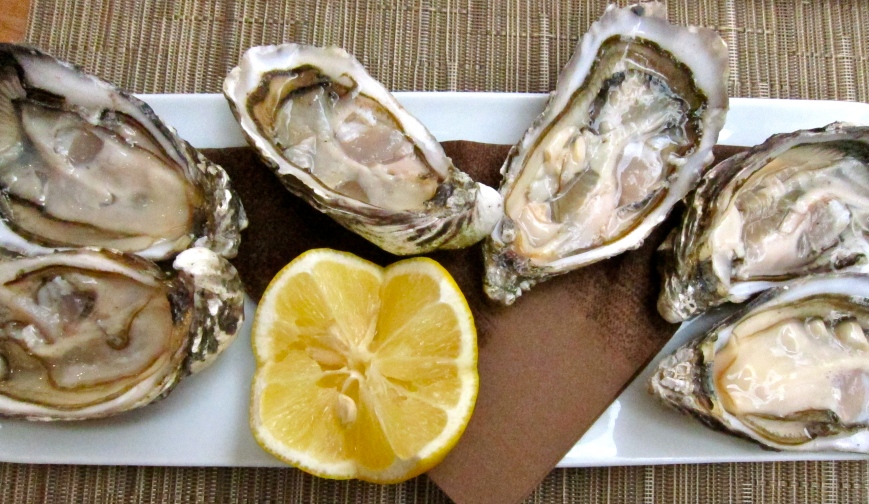 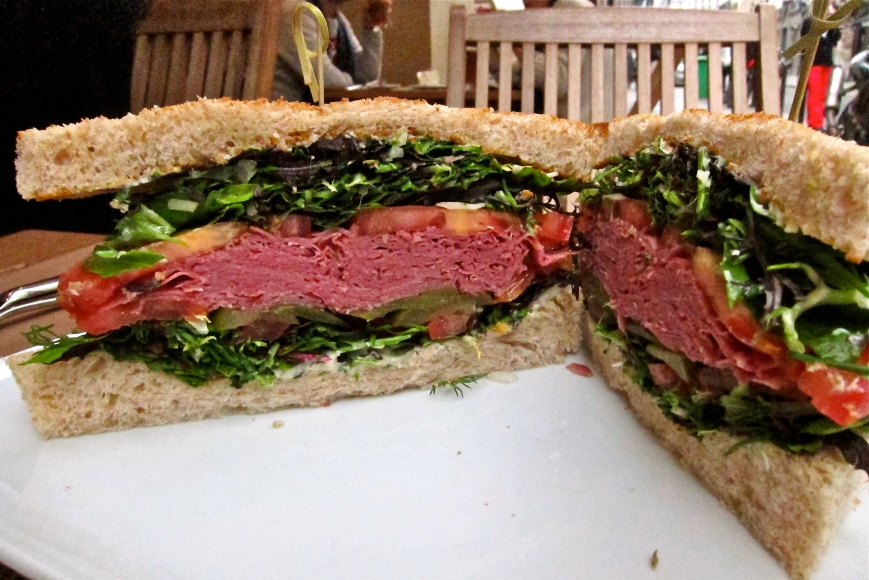 Among the best meals of our time in Paris was at 114 Faubourg, located at Hotel Le Bristol, where David Beckham stayed during his short stint at PSG. This restaurant, lead by head chef Eric Desbordes, earned its first Michelin Star this year, and it is a well-deserved star. The Bristol is also home to a 3 star restaurant, but for a more casual experience, this young Parisian chef and his team really surprised us with an incredible meal, and a memorable experience.

Photo from http://www.lebristol.com – this is one of the dishes I wish I had tried – King Crab Egg, ginger and lemon mayonnaise EUR 29

In general, the food is well presented, served with precision and flair – these beautiful little egg cups full of king crab. Beef rib eye, carved elegantly at the table (worlds away from our Jasmine-smoked spare rib carving experience at Hakkasan). There are a couple of items on the menu that are a bit surprising and a touch out of place (the fish and chips, and the beef burger), but I suppose that for a hotel restaurant, they have to have some options that would appeal to guests looking for something familiar and un-fussy. 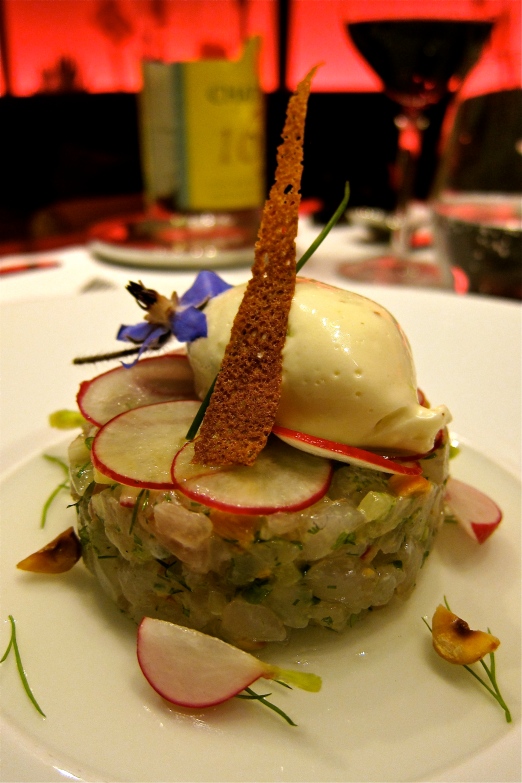 The sea bream tartare was light, crisp and fresh – a nice way to prepare the palate for the rest of my meal.

This gazpacho was literally bursting with flavour, and was proclaimed to be ‘the best gazpacho [he] had ever had’ by my brother.

The burger was less impressive, and left my brother wishing that he had gone for something more adventurous. That’s not to say that it wasn’t tasty – the local beef tasted amazing,  the fries were nice and crispy – but it just didn’t beat the other dishes that were on the table.

Similarly, my other brother felt like he should have ordered something hot after receiving his main dish. Beef tartare features prominently on a lot of French menus, and this tartare was very nicely mixed, served as a tartare and as a carpaccio.  But after eating a meal at this restaurant, I would highly recommend that you go for something that’s not an easy order – the skills of the chefs shine brighter in the other dishes. 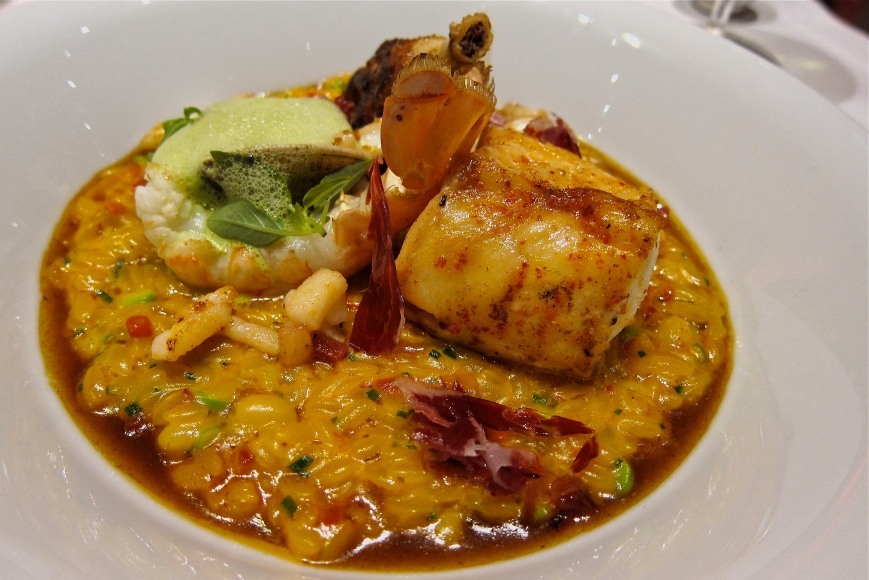 I have to say, my main course was definitely the best order out of all! I’m not usually a huge fan of rice-y dishes such as paella or risotto, but the elements in this dish were too tempting to say no to.  The monkfish was so tender, really perfectly cooked, and the broth in which nestled the tender grains of orzo was so packed full of yum that the result was indescribable. It had a strong hint of shrimp stock, but after that, the numerous layers of flavour are hard to guess.

This was another beautifully composed dish, but I felt that the cod was perhaps a touch over-cooked.

On to desserts, these profiteroles were served by themselves on a white dish, whereupon the waiter approached with a large jug of chocolate sauce and poured it on these chocolate choux morsels. It was decadent, so the coconut ice cream (piped into the choux pastry) balanced out the sweetness. Beware, this is a huge portion! I had told the waiter that I would like to share one portion with my brother, and when it was served I thought there had been some sort of mistake. Apparently not, the original serving is 6 pieces!

END_OF_DOCUMENT_TOKEN_TO_BE_REPLACED

Indian-inspired Food for the Global Palate