After visiting Cocotte for dinner when it first opened a few months back, I went back to this lovely French brasserie-style restaurant to try out their new lunch menu, which they introduced just a couple of weeks ago. The menu is a straightforward compilation of tasty seasonal dishes, beautifully presented with choice ingredients, and well portioned to fill you just enough but not leave you bursting at the seams.

You can either opt for the Express Lunch (starter and main) for HK$ 168, or the three course Executive Lunch at HK$ 198, both include tea, coffee or a soft drink. There is certainly a plethora of choice when it comes to lunch menus in the Central and Soho areas, but this one really stands out in terms of the quality of food and the high level at which it is executed. 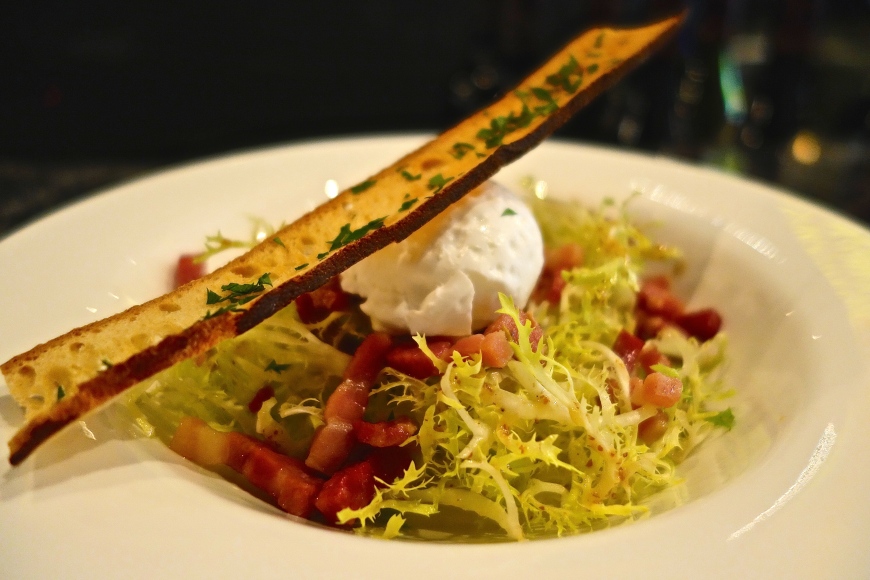 These two dishes are a light and refreshing way to start the meal. I’m not one to usually order a cold soup but this gazpacho is super refreshing, with a distinct bell pepper taste and I enjoyed the addition of whole cherry tomatoes for varying textures. The frisée salad is a simple dish with a perfectly poached egg and a grilled slice of baguette for extra crunch.

For something a bit more filling, the steak tartare has got to be my favorite starter of them all. Add as much as you want of the tangy and ever so slightly spicy tartare sauce, with a dollop of the egg white and caper mixture after mixing in the fresh egg yolk (or not!) into that wonderfully tasty beef. The salmon was under-seasoned for my liking, although those baby potatoes and horseradish cream on the side were a nice accompaniment.

On to the mains, whilst hand on my heart I loved every one of them, the star of the show has got to be the filet mignon.  I’m not usually a fan of very lean cuts and usually opt for rib eye for an extra bit of taste, but this filet mignon was incredible – tender, tasty and perfectly cooked. I hope they never take it off the menu! Beware of those fries and béarnaise sauce, they’re dangerously addictive.

The codfish was also a fabulous dish, transporting you to the Mediterranean with perfectly cooked, large translucent flakes of codfish, moreish polenta disks (I have to try making those at home!!), and a really nice ratatouille.

END_OF_DOCUMENT_TOKEN_TO_BE_REPLACED

One of the many fabulous things about the French language (the study of which eludes me daily, no matter how much I talk about picking it up again), is that there are so many words that have various different meanings, and some of the slang is just downright funny.  ‘Cocotte’ is one of those new ones that I just learned when I went to this fabulous new French brasserie earlier this week.

cocotte
kɒˈkɒt/
noun
1. a small heatproof dish in which individual portions of food can be cooked and served.
2. a fashionable prostitute.

Love it! I suppose the same thing exists in English where a word can be in one way defined as something to do with food, and yet have another completely different meaning (crumpet for example, or waffle), but it just sounds so much better in French! 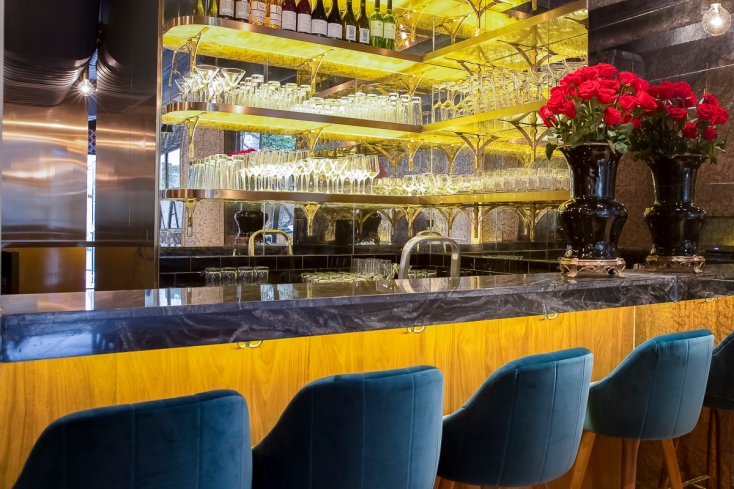 Cocotte is a new chic French eatery that has opened on my favourite ladder street. It’s located just outside the periphery of the main crowds on Hollywood/Staunton, next to the Cabane a Vin wine cellar and just up from Kushiyaki Beco and On Lot 10.

Opened and run by the Moldovan brothers, who hail from Paris but have a love for all things New York, the decor oozes chic-ness. One of the owners is a friend, and it is so interesting to see his personality directly translated into the look and feel of the restaurant. I love the use of luxurious wallpaper, the moss green velvet banquette, the red white and blue mis-matched chairs, the retro lighting, even the dark purples walls in the bathroom.

And now to the food … 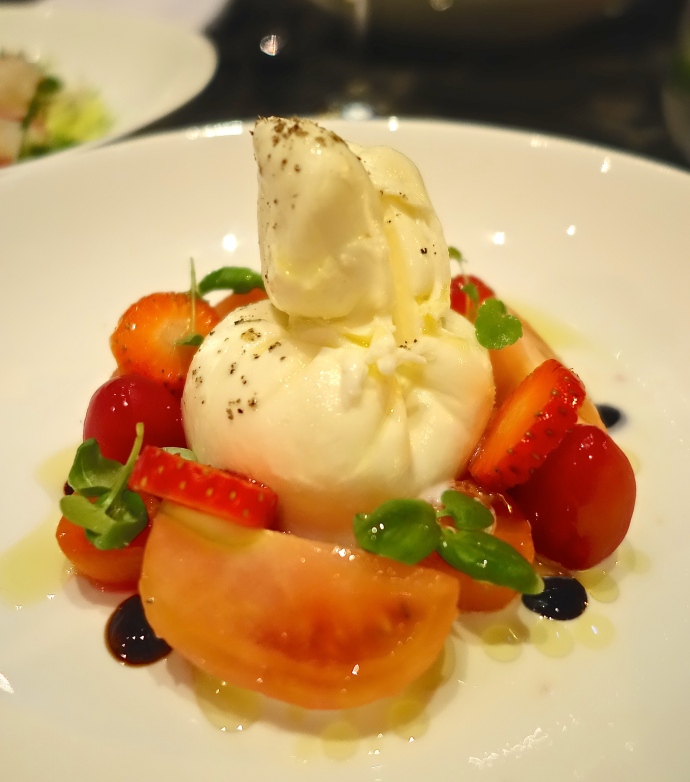 The burrata burst onto the plate upon the slightest touch, and the pairing with strawberries was unusual yet tasty.

This dish is a thoughtful one – the beef tartare comes with roquefort, which you can choose to mix in or leave on the side (thankfully, for us blue cheese haters). The tartare sauce is served in a separate jar,  which I thought was very considerate to the diner – one can choose to add as much or as little of it as they’d like.

The foie gras is served with smoked duck, raspberries and a sort of cookie crumb. It is not served with any toast or bread (perhaps you’re expected to eat it sans pain), but you can ask for it on the side.

Believe it or not, I forgot to take a picture of the ‘Langoustine, Barely Touched’. As the name suggests, the langoustine is just ever so slightly seared, very fresh and light. It is clearly one of their more popular dishes, and when we were told that the kitchen only had 3 servings left, we took them all.

The veal melted in the mouth; moist, with a very subtle taste, and it was perfectly cooked. 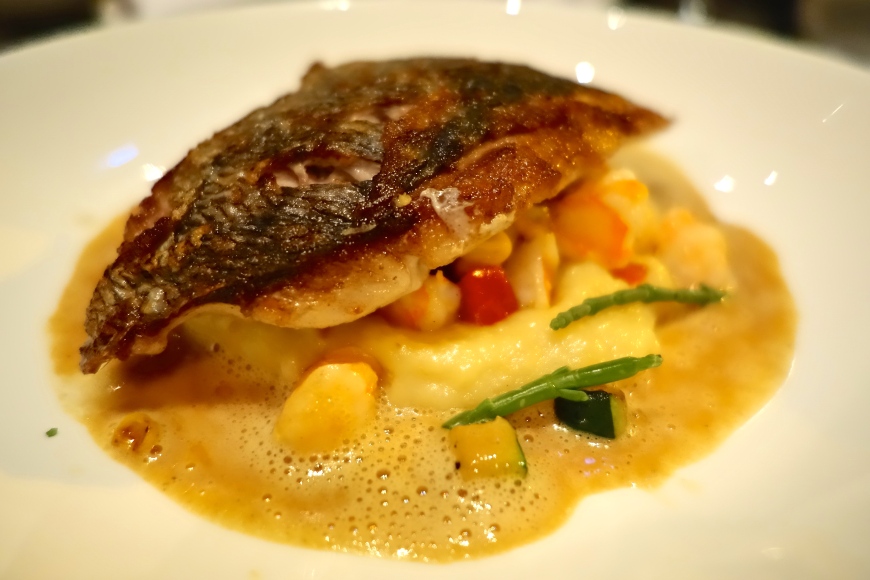 The fish was very well executed, with a lovely creamy potato puree. Stacked on top were vegetables and crisp shrimp, resting on a rich lightly foamed bisque.

END_OF_DOCUMENT_TOKEN_TO_BE_REPLACED

The Chefs Recommendation board

I recently asked a friend, who lived for several years in Tokyo, what her favorite Japanese restaurant in Hong Kong is – and Beco was her answer. Never one to ignore a good recommendation, I booked a table there as soon an an opportunity arose. She then very sweetly sent me a list of things to eat, “in order of importance” 🙂

Opened in 2011, a collaboration between Sushi Kuu chef Satoru Mukogawa and On Lot 10’s David Lai, Kushiyaki Beco is located along one of the stairway streets off Hollywood Road, where La Cabane Cellar is. It’s a small, cozy eaterie reminiscent of the tiny yakitori restaurants in Shinjuku. With just 20 seats on the ground level and around the same upstairs, it’s casual and quite unassuming, as some of my favorite restaurants tend to be. I saw Quail Egg Skewers on the Specials board, and I knew we were onto a good start.

I was wondering what the name meant, and found out that kushiyaki means ‘grilled skewer”. I asked myself, doesn’t yakitori mean then same thing? Here’s what Wikipedia says:

Yakitori (焼き鳥, やきとり, ヤキトリ?), grilled chicken, is commonly a Japanese type of skewered chicken. The term “yakitori” can also refer to skewered food in general. Kushiyaki (skewer grilled), is a formal term that encompasses both poultry and non-poultry items, skewered and grilled. Both yakitori and kushiyaki mean the same, so the terms are used interchangeably in Japanese society.

You learn something new every day!

Another new discovery that evening was that of yuzukosho (yuzu paste), simply the most bad-ass crazy-awesome sauce out there. It’s a fermented paste made out of yuzu orange peel, chilis and salt. The type of yusukosho depends on the the colour of the chili used – bright green for green chilies, and orange-y red with red chilies.

The taste and mouth-feel of this paste is quite extraordinary. At first taste it is salty, but then your tongue is tricked into thinking it’s more bitter than salty, due to the yuzu peel. Then the chili kicks in, not a kill-your-palate burn, but a warm, subtle numbing heat.  Forget wasabi, I am now going to be using yuzukosho with everything! Want to know more? Check it out here.

At Beco, yuzukosho was served with the short-rib skewers and ox tongue skewers. The short-rib is beautifully tender and incredibly tasty, and whilst the ox tongue had a nice texture, it wasn’t as flavourful as I would have hoped. 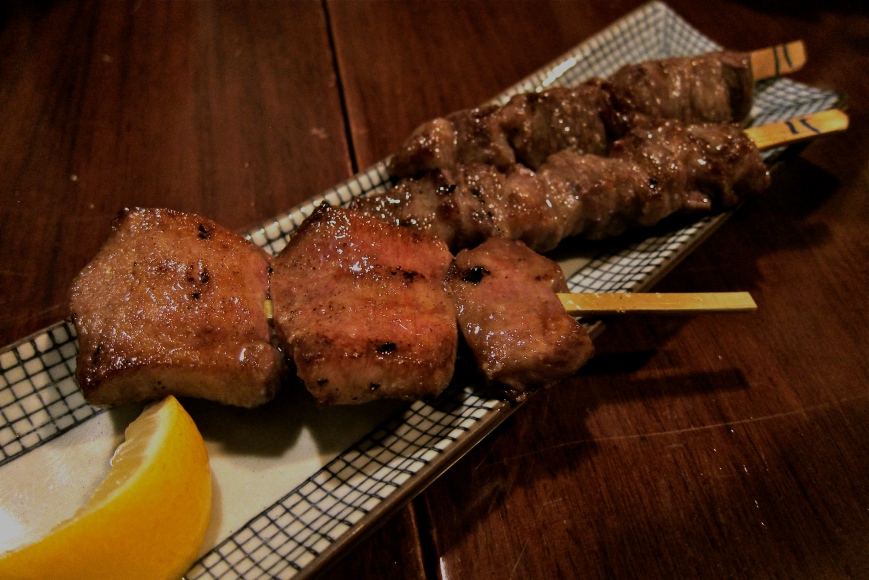 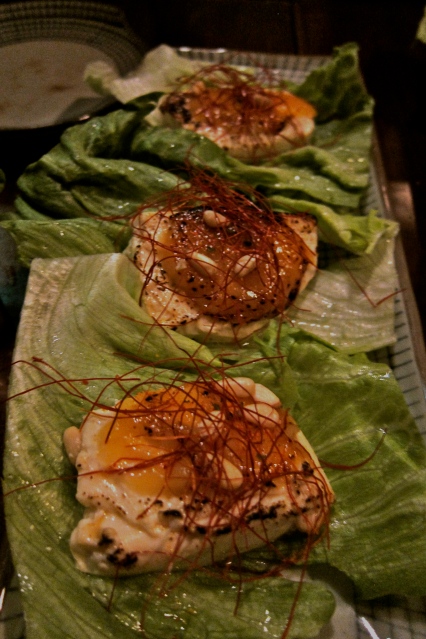 The grilled tofu ‘steaks’ were smeared with a yuzu jam and topped with pine nuts and red pepper threads, served atop a piece of lettuce for easier transfer from plate to mouth. Again, I was a big fan of the yuzu jam, but the tofu wasn’t seasoned enough for me, and it was a bit bland. 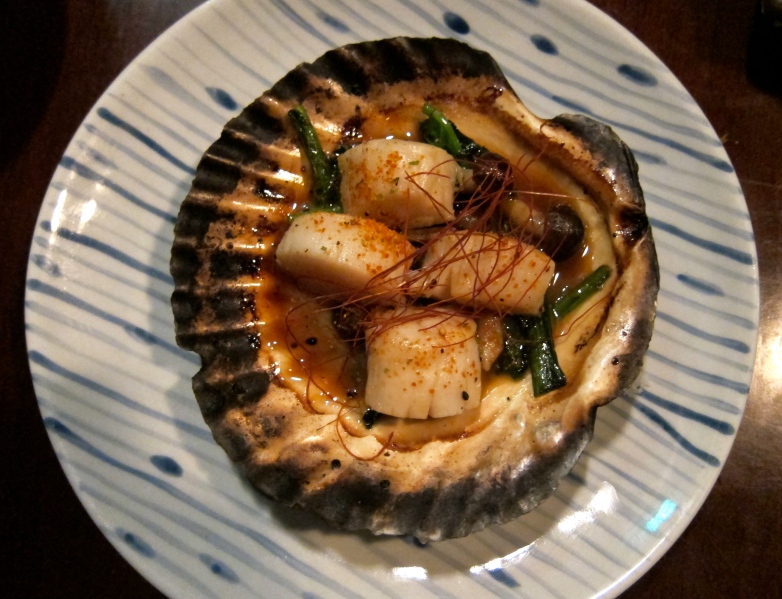